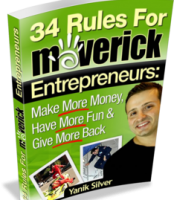 Ok I admit I was wrong…

With my background as a copywriter, I’m pretty careful about most of the words I choose. It’s your words (and even your internal dialogue) that have a tremendous impact on how you think, feel and behalf. By saying the words ‘giving back’ this implies entrepreneurs, like us, have taken something.

Let’s think about that for a second…

I assert that entrepreneurs and businesses can only succeed by providing and delivering value. Period. End of story. It’s simply a universal law. In fact, one of my core values in my very first journal said, “I get rich by enriching others 10x – 100x what they pay me in return.” There’s no other way that it could possibly occur because, in the long run, the marketplace is always self-correcting.

The notion of ‘giving back’ seems to echo an undeserving indebtedness or even guilt for success. Should you begrudge entrepreneurs like Steve Jobs, Richard Branson or Bill Gates for their wealth?

Each one of them created immense value exponentially in proportion to what they’ve received. (And that’s not counting the thousands of jobs, additional utility, new startups piggybacking on their success, etc.)

My friend and mega mansion builder/real estate artist/philanthropist, Frank McKinney, sums it up with a saying he told our Maverick1000 group in Haiti, “We have to be careful not to weaken the strong in order to strengthen the weak.”

At our core, entrepreneurs are simply growth-oriented innovators and value creators. They almost can’t help themselves. Take Bill Gates for instance. Aside from his impact on micro-computing, his greatest contribution going forward will be around the Gates Foundation eradicating disease and driving new educational initiatives.

And he’s not alone. Other billionaires are not content to just “give back”. They’re giving forward by applying entrepreneurial talent, energy and capital to solve some of the biggest issues facing the globe.

But you don’t have to be at the level of a Gates or Branson to make a difference. Today, a group of 21st century maverick entrepreneurs are leading the way to change the way business is played and even the rules by which we keep score.

Who says it’s only about one measurement on your P&L?

Look at TOMS shoes. Yes, they’ve been the poster child for creative impact with their “Buy One, Give One” initiatives but it’s for good reason. They’ve created a powerful (and profitable) business model tied directly into doing something that will have a significant impact. And the best part is their customers, retail partners and vendors want to help spread that story driving increased sales.

I love looking at businesses that are doing something that matters tied in with the causes they support in a real, genuine and authentic way. In many cases, you can create a way to automatically give and support causes important to you – creating a win/win/win for everybody. (Spoiler alert: we have a very big announcement coming up with the first ever “3-for-1 Scholarships”.)

Your business can actually flourish because incoming research is proving customers are favorably disposed to doing business with you if there’s an added bonus of philanthropy “baked” in. In fact, I’ve directly seen results of split tests with one of our Maverick1000 members showing a 10% increase in sales because $50 from every sale went to a charity featured. Not only do they sell more products but the cause involved get additional support and exposure.

Entrepreneurs are the lifeblood of growth, adding value and solving many of the problems we’re encountering on a local or global level.

I believe it’s time for a growing group of committed leaders to come together and create a compound effect for positive change from little, maybe even tiny investments. That’s the idea for a new movement we’ve co-founded with an initial group of highly regarded entrepreneurs and thought leaders called “3% Forward”.

The big idea is to designate 3% of your annual sales as your “giving forward” pledge goal. Your 3% can be provided in any combination of money, talent and/or product or service for a cause that matters most to you. It might be a innovative non-profit in education, healthcare, the environment or even investing in new start-ups or micro-entrepreneurship…whatever is most important to you and whatever you think can have a multiplier impact for good would count.

We don’t keep any of these donations and you choose who/how/where and when to directly donate.

The 3%’er community will introduce you to new ideas, inspiration, best practices and innovative business models for how you can create a bigger impact that also positively buoys your bottom line. (It’s our sneaky plan to make your 3% pledge for each year grow even greater.)

Or if you’re already donating 3% or more – that’s great! We want you to get credit for the good you’re doing by standing with other entrepreneurs proudly bearing the 3% Forward Pledge seal.

I’ve always believed one entrepreneur can change the world…now let’s see what happens when we stand together to create a transformative catalyst for what matters most. And July 3, 2012 marks the start of this “revolution” and it continues every 3rd of the month.